What is Psyllium Husk? Benefits, Uses, Recipes and More

Psyllium Husk is an amazing herb that is both gluten-free and vegan. It is mainly used for supporting digestive health because of the fibre content.

Fibre is vital to deliver essential nutrients to the entire body. Most commonly, we receive fibre from whole grains, fruits and vegetables.

The reality is, most individuals do not consume enough fibre-rich foods each day and it can pose health issues such as constipation.

The recommended daily fibre intake is anywhere from 25-30g, depending on age and gender. The average North American consumes just 15g per day.

Psyllium husk can be a great addition to the diet along with other whole foods to help with digestion for the whole family.

WHAT IS PSYLLIUM HUSK?

Psyllium husks come from a plant called Plantago ovata. This plant grows worldwide but is most commonly grown in India. The husk surrounding the psyllium seed is a rich source of soluble fibre. Soluble fibre draws water into the gut, which can soften the stool and support healthy bowel movements. This can help to promote easy and healthy elimination as it sweeps the waste from the colon.

Psyllium contains a hemicellulose fibre called arabinoxylan, a type of viscous water-soluble fibre that attracts and binds with water(1).

Psyllium husks also contain mucilage and this causes them to expand by attracting water and forming a slippery gel. They are approximately 70% soluble fibre and 30% insoluble fibre.

A popular way of consuming psyllium husk is in powder form. This form is edible soluble fibre and a prebiotic. Prebiotics are food for the beneficial bacteria in the digestive system.

WHAT ARE THE BENEFITS OF PSYLLIUM HUSK?

Psyllium husk is both safe and effective in improving Irritable Bowel Syndrome (IBS) symptoms for most individuals. IBS can cause a significant amount of pain, stress and gastrointestinal symptoms such as bloating, gas and cramping. In a review of 14 randomized controlled trials, psyllium supplementation had a significant beneficial effect on reducing the severity of IBS symptoms(2). One study showed positive results when children with IBS consumed psyllium husk. The treatment showed improvements with abdominal pain and stool patterns in these children with IBS as there was a reduction in abdominal pain episodes.

Another study demonstrated that long-chain, intermediate viscous, soluble and moderately fermentable dietary fibre, such as psyllium, results in low gas production and the absence of symptoms related to excessive gas production. These results have been documented as part of IBS management and are known for improving overall symptoms. (3)(4)

Up to 19% of the North American population (about 63 million people) are not eliminating properly. Constipation is a huge issue!

Psyllium can help individuals who are diabetic or those working towards preventing diabetes. A study showed that taking psyllium husk daily can help those with Type 2 Diabetes to control their blood sugar levels without any negative side effects.(6)

Fibre can be incredible for those without bacterial imbalances. Fibre is one of the natural habitats for beneficial bacteria in the gut. They love to feed on it, producing a whole host of good nutrition for the gut wall and the whole body.

The colon of the human gastrointestinal tract contains a large population of bacteria. Approximately 55% of the solids in feces are bacteria and fungus. Psyllium is great for maintaining the bacterial balance in our colon, which then strengthens immune function.

For those with existing bacterial imbalances, it is important to rebalance the gut first, and then slowly reintroduce fibre. If there isn’t a healthy balance of bacteria in the gut, adding high amounts of fibre can feed the bad bacteria.

It is also important to note that because psyllium husk is fermented in the large intestine, those following a low FODMAP diet should eat it with caution.

THE SCOOP ON COMMERCIAL FIBRE SUPPLEMENTS

The truth is, many popular commercial fibre brands on the market today contain sugar, artificial flavours, colours and fillers. These ingredients can cause health issues and exasperate digestive issues.

Studies show how a diet high in sugar and processed foods can lead to gut dysbiosis (imbalance of gut bacteria) which will lead to constipation and or diarrhea. Sugar is the leader of dysbiosis as it feeds the bad bacteria in the gut.

The best way to add fibre to your diet is from whole foods. This makes psyllium husk a perfect option to help to increase your fibre intake and reduce constipation.

HOW TO USE PSYLLIUM HUSK

There are many ways to add psyllium husk into your everyday diet. You can bake and cook with it, or you can simply add some to water and drink it.

Here are my recommendations for dosages:

Once the psyllium husk has been mixed with water, it will thicken and create a gel-like consistency. The mixture should be consumed immediately upon mixing.

If symptoms of minor gas or bloating occur, reduce the dose each day until your digestive system adjusts.

Psyllium husk is known for helping to keep the digestive system moving, but it’s also amazing for baking!

Bakers, including myself, love to use psyllium husk/powder as it helps to thicken and bind baked goods like cakes and bread. The water is absorbed and helps to give the product a thicker texture.

Psyllium husk has become a common thickener and binder for gluten-free cooking and baking. It has a wheat-like texture without the wheat making it perfect for those with celiac disease and gluten-intolerance. Psyllium husk helps to bring the structure back into baked goods so your gluten-free recipes aren’t dry and crumbly.

We love to have a chicken fajita night and use the delicious homemade coconut flour and psyllium husk wraps.

Psyllium husk can also be added in soups and sauces for a thickening agent, smoothies, and other recipes, like overnight oats to mask the texture!

Adding in psyllium husk to a smoothie can be a great way to incorporate into your diet without even noticing it. It is a perfect option for kids too!

A common breakfast for my toddler is a high-fibre berry smoothie. It consists of high-fibre foods like Rootalive’s psyllium husk. I also like to add in some Ceylon cinnamon for its antioxidant properties and blood sugar benefits. (8) (9)

Place all ingredients into the blender. Blend on high for a minute or until smooth.

Psyllium husk also makes a great egg substitute similar to a flax egg. Substitute 1 egg for 1 teaspoon of psyllium husk with 1 tablespoon of warm water. Let it sit for 2 minutes until it forms into a gel-like substance. Then you’re ready to add it to your baking mixture just as you would an egg.

Psyllium can give a fibre boost to the body so it can be worth incorporating into your family’s diet. It is a great way to maintain good bowel health along with a whole foods diet. It can also help to achieve a feeling of fullness.

In addition to all that, psyllium makes a great ingredient to create many delicious gluten-free recipes for the whole family!

If you try out the psyllium husk recipes, make sure to tag us on Instagram so we can see! @rootalive @reclaimedhealthjayde

Jayde is a Certified Nutritional Practitioner with a passion for helping those with digestive issues, IBS, bloating and celiac disease. At the age of 13, Jayde was diagnosed with celiac disease and had to make changes to her diet and lifestyle to overcome her health challenges.

Jayde has created an online Digestive Wellness Program to help those with a compromised digestive tract. Jayde lives in Bowmanville, Ontario with her husband, son and German Shepherd, Hope. 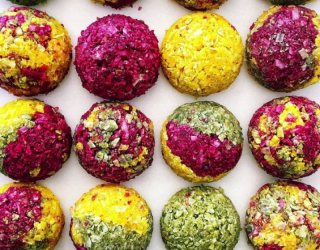 Easy Ways to Use Superfoods in Your Daily Diet

Resolutions...what are those again? If that just about sums how your s... 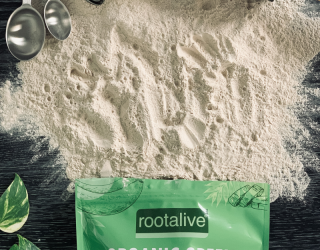 Delicious Tips to Use Gluten-Free Flour In Your Kitchen

If you’re new to gluten-free flours, you might find them to be a...

Product added to wishlist
Product removed from wishlist
You are already subscribed in our mailing list.
Thank you for subscription!